Without a doubt the most famous dish in regards to the Chianina breed is "La Bistecca Fiorentina". The Florentines consider it one of the highest expression of Tuscan gastronomical achievement. It will however be a long and arduous debate over which cut is actually used. The Italians don't really care much for our "English" butchering styles and whether la Bistecca is a T-bone or a porterhouse or indeed a rib eye is of little consequence, and there is probably regional diversity in the cut of meat served by various restaurants.

The reality is that Italians are (and have been for millennia), the proponents of "Nose to Tail" eating, i.e. they don't waste anything. They would have traditionally used some form of steak as the Bistecca and then the various other "lesser" cuts would have been used in the multitude of delicious beef dishes that they excel at. Being such a rich tasting meat, some of our favourite dishes are those that involve long slow cooking methods as these bring out the divine unctuous flavours that short sharp cooking methods don't maximise. 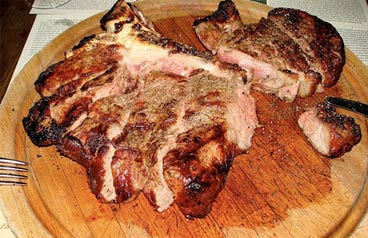 Leave the steak out of the fridge for at least 6 hours to bring it up to room temperature.

You will preferably need a charcoal grill, and it needs to be as hot as you can possibly get it.

Just before you put the meat on the grill, you give it a handful of sea salt on both sides. The Italians love salt and are not afraid of using it liberally...

The meat is put on an extremely hot grill and literally is charred on both sides for a very short period of time. It will be only turned over one time. The salt will help the quick caramelisation that is very important for this steak.

Charred and dark on the outside and rare on the inside is how you want this steak to be served. The steak is cooked fast, served rare.

Once it comes off the grill only a splash of premium extra virgin olive oil is applied and that's it. Give the meat a good rest, then cut the steak against the grain. Put the meat back together and serve it on a plate traditionally with "fagioli al fiasco" and l'insalata la rucola... (white cannelloni beans and a rocket salad).